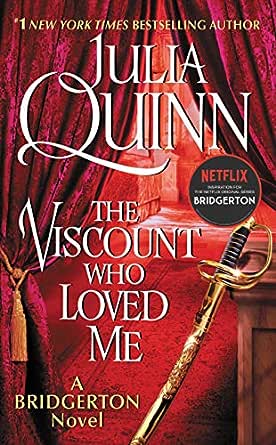 Subtotal ₹
Cart
View your cart
To add this eBook, remove any 1 eBook from your cart or buy the 25 eBooks present in the eBook cart
Review items in your cart
There was a problem adding this eBook to the cart
Kindle Edition
₹ 257.34 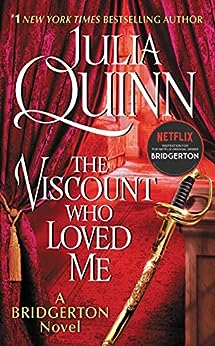 The Viscount Who Loved Me: Bridgerton (Bridgertons Book 2) Kindle Edition

The second book in the globally bestselling Bridgerton Family series, the inspiration behind the Netflix series Bridgerton. Welcome to Anthony's story . . . --This text refers to an alternate kindle_edition edition.

1814 promises to be another eventful season, but not, This Author believes, for Anthony Bridgerton, London's most elusive bachelor, who has shown no indication that he plans to marry. And, in all truth, why should he? When it comes to playing the consummate rake, nobody does it better . . . —Lady Whistledown's Society Papers, April 1814

Contrary to popular belief, Kate is quite sure that reformed rakes do not make the best husbands— and Anthony Bridgerton is the most wicked rogue of them all. Kate is determined to protect her sister—but she fears her own heart is vulnerable. And when Anthony's lips touch hers, she's suddenly afraid she might not be able to resist the reprehensible rake herself . . .

Julia Quinn started writing her first book one month after finishing college and has been tapping away at her keyboard ever since.

The New York Times bestselling author of twenty-four novels for Avon Books, she is a graduate of Harvard and Radcliffe Colleges and is one of only fifteen authors ever to be inducted into the Romance Writers of America Hall of Fame. She lives in the Pacific Northwest with her family.

Wise, lovely, and kind, Kate Sheffield is determined that her beautiful half-sister, Edwina, marry a reputable man. Unfortunately for Kate, Viscount Anthony Bridgerton--London's most eligible bachelor and a notorious rake to boot--sets his sights on Edwina, and what the viscount wants, the viscount gets. Only this time, Anthony must win the elder sister's approval before he may charm the young beauty into marriage.

Hardly a problem for the impossibly handsome viscount, that is until the determined Kate, whose deep, dark eyes and lush mouth send his senses racing, presents a challenge that Anthony cannot refuse. Worse yet, Kate's response to his playful advances only confirms the ardent attraction that both seem desperate to deny. Anthony is faced with a dilemma. On the one hand, the perfectly amiable Edwina, while on the other, the most stubborn, single-minded--yet confoundedly desirable--female ever to grace a London ballroom. Anthony's quandary comes to a fast and fateful conclusion when he and Kate are caught in an innocent but compromising position. There's no choice but to marry, a resolution that leaves both parties uneasy. For despite their growing feelings, each struggles with personal demons that may destroy any chance for true happiness.

It's no surprise that Julia Quinn's setting, characterization, and plot are flawless. Add to this masterful mix deeper emotional issues offset by the trademark Quinn wit, and you truly do have romance at it's best. Nobody does Regency quite like the mighty Quinn. --Lois Faye Dyer --This text refers to the mass_market edition.

4.5 out of 5 stars
4.5 out of 5
9,773 global ratings
How are ratings calculated?
To calculate the overall star rating and percentage breakdown by star, we don’t use a simple average. Instead, our system considers things like how recent a review is and if the reviewer bought the item on Amazon. It also analyses reviews to verify trustworthiness.

Bookosaurus
5.0 out of 5 stars Loved it!
Reviewed in India on 28 December 2020
Verified Purchase
I loved it! Specially the banter between the lead pair as well as with the siblings was just awesome! And the fear and vulnerabilities were so real, so real life...the chemistry was scorching...what else do we need in a romance novel? Perfect!
Read more
3 people found this helpful
Helpful
Report abuse

The Researcher
4.0 out of 5 stars Its a good read. However the end is little too stretched ...
Reviewed in India on 6 August 2015
Verified Purchase
Its a good read.However the end is little too stretched and long.It seems unnecessary to stretch the end so much.Overall worth buying and reading.The dialogues are funny ,sometimes hilarious and intriguing.Reduced one star because i found the end not up to the mark.However one time read .
Read more
Helpful
Report abuse

Madhu Mita
5.0 out of 5 stars awesome writing
Reviewed in India on 19 August 2017
Verified Purchase
im a big fan of julia quinn writing. though i had already read this book once from my library i bought it for my kindle library. nice read when you need a good laugh.
Read more
Helpful
Report abuse

Kindle Customer
3.0 out of 5 stars Okayish
Reviewed in India on 2 February 2021
Verified Purchase
Probably won't continue with the series. 8 books are a lot to read anyway. Was bored in the middle, there wasn't much of a plot to keep you engaged.
Read more
Helpful
Report abuse

revanth kumar
5.0 out of 5 stars Loved it
Reviewed in India on 12 February 2021
Verified Purchase
After watching Bridgerton on netflix, I couldn't stop myself from purchasing this book. Absolutely loved it!!!
Read more
Helpful
Report abuse

ashwathy
5.0 out of 5 stars Five Stars
Reviewed in India on 20 January 2018
Verified Purchase
Julia Quinn always makes sure that we enjoy the story line as much as the character arcs.
Read more
Helpful
Report abuse

nisha devi
5.0 out of 5 stars five star
Reviewed in India on 28 April 2015
Verified Purchase
I am loving it. .its a great book. .interesting. .captivating. .
Read more
Helpful
Report abuse
See all reviews

BalW
4.0 out of 5 stars Jane Austen with sex (and lots of it)
Reviewed in the United Kingdom on 3 January 2021
Verified Purchase
I didn't read the first book because I watched the Netflix series. So bought this one to check if the writer could actually write a good story, and she can but with a particular formula. I have now read number 3 and tired of the formula, so not going to bother with the others because they will probably follow the same pattern which is predictable. I also know that Colin marrys Penelope beause it is is at the end of the second book if you are concentrating!! No competition with Jane Austen because all of her books are very different and the tantalising sexual tension in Austen's books are probably preferable to many readers than the overt sex scenes in these books.
Read more
19 people found this helpful
Report abuse

Anz
3.0 out of 5 stars Slightly better than the first one
Reviewed in the United Kingdom on 12 January 2021
Verified Purchase
Having just read "The Duke and I", and more or less enjoyed it, I ordered and read this one straight away. It's nothing I haven't read before.
The plot is un-imaginative and at times ludicrous. The lead characters spend half of the book threatening bodily harm on eachother and on many occaissions carrying out those threats. It's supposed to be funny but it's childish nonsense (some might say abuse).

As with the first book, the dialogue is clunky, there are a few americanisms and a lot of rubbish. But as with the first it is readable, i whizzed through this in an afternoon, time wasting, brain resting drivel.

If you are looking for high literature, unforgettable characters and the New Darcy, this is not for you, if you are looking to be vaguely entertained ... read on.
Read more
10 people found this helpful
Report abuse

California Quinn
5.0 out of 5 stars My favourite Bridgerton, by a whisker!
Reviewed in the United Kingdom on 25 July 2020
Verified Purchase
Oh how I adore a reformed rake and there's no one more delicious in my book than Anthony Bridgerton, who turned up in the first Bridgerton book defending his sister Daphne and has made a decision at the beginning of this book to marry Kate Sheffield's sweet and biddable younger sister... The only thing standing in this very eligible bachelor's way - thanks to his previously well reported wicked ways - is Claudia's older sister who is not nearly so biddable and is determined to save her sister from the likes of Anthony. Clearly inspired by the Taming of the Shrew this is a wild, witty and also passionate tale of two strong-willed people finding love and a lot more besides. I adored this book and after having hoovered up the whole Bridgerton series, I think this is probably my favourite (although that was a tough choice I can tell you!). I loved the dynamics between these two alpha personalities. And there is an absolutely hilarious game of Pall Mall as the two of them try to cheat each other to a win while the rest of the clan look on. Quite simply unputdownable.
Read more
11 people found this helpful
Report abuse

jbfranco
5.0 out of 5 stars Absolutely enchanting !
Reviewed in the United Kingdom on 5 August 2019
Verified Purchase
I was hooked from the very beginning! I loved the way this author writes and how she develop the story. What a nice touch the “gossip” society papers gave to this book. It was hilarious. On top of that I loved Kate and Anthony chemistry, romance and cute banter. Love love love ! This book has it all plus a heroine & hero with a witty mind and funny moments that had me laughing out loud. I stayed till earlier hours reading without stopping. So is really good this book and a must read for all fans of a historical romance. ❤️
Read more
9 people found this helpful
Report abuse

Ritu
4.0 out of 5 stars Fabulous Regency!
Reviewed in the United Kingdom on 3 January 2021
Verified Purchase
Okay, so I think I may just have enjoyed this one more than the first, since I had no TV series to compare it to!
This time, we hone in on the life of Bridgerton sibling #1, aka the Viscount, Anthony Bridgerton.
He's never been fussed about marriage, but this season, he decides, will be the one where he finds a suitable wife, and settle down.
Kate Sheffield is the elder sibling in her family, too. Stepping out into the London season a couple of years later than desired, she is in the shadow of her beautiful stepsister, Edwina. Her stepmother, Mary desires for both girls to find good matches, but the burden is on, to Edwina find the catch of the season.
He's dashing.
And also a rake.
Who doesn't have the approval of the sister, Kate, but seems to affect her in all manner of inappropriate ways.
What ensues is a great enemies to lovers story, where we see both parties fight their attraction to each other, until they are not able to any more.
Such fun!
Read more
3 people found this helpful
Report abuse
See all reviews
click to open popover
Unlimited FREE fast delivery, video streaming & more
Prime members enjoy unlimited free, fast delivery on eligible items, video streaming, ad-free music, exclusive access to deals & more.
> Get started
Back to top
Get to Know Us
Connect with Us
Make Money with Us
Let Us Help You
EnglishChoose a language for shopping.
© 1996-2021, Amazon.com, Inc. or its affiliates