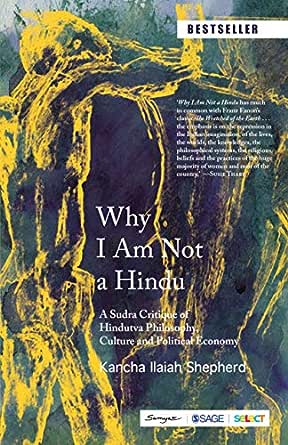 Subtotal ₹
Cart
View your cart
To add this eBook, remove any 1 eBook from your cart or buy the 25 eBooks present in the eBook cart
Review items in your cart
There was a problem adding this eBook to the cart
Kindle Edition
₹ 217.44 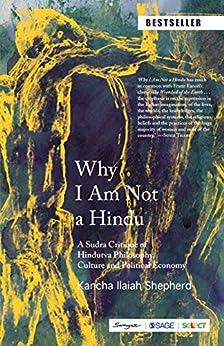 Why I Am Not a Hindu: A Sudra Critique of Hindutva Philosophy, Culture and Political Economy Kindle Edition

‘Ilaiah’s trenchant attack on the spiritual fascism that excludes the weak and the poorest, makes him one of the most passionate and philosophical voices of the Ambedkarite movement and its challenge to Brahminical Hindu society. Ilaiah is one of the foremost thinkers of that powerful counterargument.’ (Sagarika Ghose, Consulting Editor, The Times of India)

“Mr. Ilaiah’s books such as God as Political Philosopher: Buddha's Challenge to Brahminism, Why I Am Not a Hindu, Post-Hindu India: A Discourse in Dalit-Bahujan Socio-Spiritual and Scientific Revolution explore new ideas and are provocative…challenge conventional thinking, the majority Hindu view and the caste system as an element of Hindu practice.”

“About lived realities, work, instruments, culture and social relations…products of years of field work.” (The Indian Express) --This text refers to the paperback edition.

Kancha Ilaiah Shepherd recently retired as Director, Centre for the Study of Social Exclusion and Inclusive Policy, Maulana Azad National Urdu University, Hyderabad. He is Chairman of Telangana Mass and Social Organizations (T-Mass) that works for English-medium education. He has helped to build up Dalit-Bahujan and civil liberties movements in India. He received the Mahatma Jyotirao Phule Award, 2000.
His paper ‘Experience as Framework of Debate’, which appeared in the Economic and Political Weekly, set up new terms for the debate on the reservation policy during the anti-Mandal struggle in 1990. His contributions have appeared in Economic and Political Weekly, Frontier and Mainstream and in major national English dailies like The Hindu, The Times of India, Hindustan Times, The Indian Express, Deccan Herald and Deccan Chronicle. He is also a regular contributor to Telugu magazines and to dailies like Vaartha and Andhra Jyothi.
As his books raised a major debate in English and other regional media, he wrote a book in Telugu, Manatatwam (Our Philosophy), which put the Dalit-Bahujan productive philosophy in a new perspective. The book became an ideological weapon among Dalit-Bahujan and Left circles in Andhra Pradesh. Among his books are Turning the Pot, Tilling the Land: Dignity of Labour in Our Times and The Weapon of the Other: Dalit-Bahujan Writings and the Remaking of Indian Nationalist Thought.
Kancha Ilaiah Shepherd was a post-doctoral fellow with Dalit Freedom Network, Denver, Colorado, 2004-2005 and as a member of the network, he has deposed before several international committees about the historical role of caste and untouchability in sustaining a modern form of slavery in India. He was a member of the National Campaign for Dalit Human Rights (NCDHR) that took the caste and untouchability issue to the UN Conference on Racism, Racial Discrimination and Xenophobia at Durban in 2001. --This text refers to the paperback edition.

4.2 out of 5 stars
4.2 out of 5
79 global ratings
How are ratings calculated?
To calculate the overall star rating and percentage breakdown by star, we don’t use a simple average. Instead, our system considers things like how recent a review is and if the reviewer bought the item on Amazon. It also analyses reviews to verify trustworthiness.

Vijay kumar
5.0 out of 5 stars Wonderful book!!!
Reviewed in India on 9 January 2019
Verified Purchase
Excellent book portraying the drawbacks of Brahminism. How Upper caste people have hegmonised even spirituality and the concept of swarg as their private property. When I read this I came to the understanding of certain unknown facts about hinduism. Their parasitic nature is exposed by Kancha Ilaiah wonderfully, how they suck the blood of Dalitbahujans while sitting leisurely at home and in the temples.
Read more
51 people found this helpful
Helpful
Report abuse

Amazon Customer
5.0 out of 5 stars It's a must read
Reviewed in India on 26 February 2019
Verified Purchase
So many things will start to make sense. As to why Hindu god's were created. How brahmin hegemony was established and how with consent sudras or ati sudras were made to tolerate atrocities.

The negatives of the book may be the lack of thorough research. But duly compensates with logic and common sense.

Bhaire
5.0 out of 5 stars A true book to open eyes
Reviewed in India on 27 December 2019
Verified Purchase
Kanche ilaiah shepherd is an another prophet to save people of backwardness not only in India but also across globe. He is da one who sacrificed his life for equality to all. I got inspired so much dat i started teaching my frnds, kaleegs n relatives etc about how exploitation n attrocities r still going on n how the terrible affects are for da victims.
Finally, i bow down before kanche ilaiah shepherd for his tremendous contribution to man kind.

manoraj
5.0 out of 5 stars Must read for all Indian's
Reviewed in India on 21 November 2019
Verified Purchase
A book to all those who want to know the truth. And understand religion in a better way. Buy this book, before reading keep your mind open and think. Ask question with yourself while reading this book and you will understand every aspect of our religion. This author has done more justice to all Indians than all other religious authors combined.
Read more
6 people found this helpful
Helpful
Report abuse

Kindle Customer
5.0 out of 5 stars A necessary dichotomy
Reviewed in India on 15 June 2019
Verified Purchase
I am still searching for the Hindu text, that tells about harvesting, pottery and all other production processes, that are unavoidable for the mere survival of human being. Found some hints in this book.
Read more
8 people found this helpful
Helpful
Report abuse

Sai Ganesh Akarapu
5.0 out of 5 stars Awesome...
Reviewed in India on 8 July 2019
Verified Purchase
Inisightful .....Have to be read by everyone....
Read more
7 people found this helpful
Helpful
Report abuse

Vinay Tandon
5.0 out of 5 stars The REAL picture
Reviewed in India on 16 April 2019
Verified Purchase
Brings out what we have been up to all these centuries and won't even stop now. Younger people need to read this book and know.
Read more
9 people found this helpful
Helpful
Report abuse
See all reviews

Amazon Customer
1.0 out of 5 stars One Star
Reviewed in Canada on 14 August 2016
Verified Purchase
Not what I expected. More autobiographical.
Read more
One person found this helpful
Report abuse
See all reviews
click to open popover
Back to top
Get to Know Us
Connect with Us
Make Money with Us
Let Us Help You
EnglishChoose a language for shopping.
© 1996-2021, Amazon.com, Inc. or its affiliates