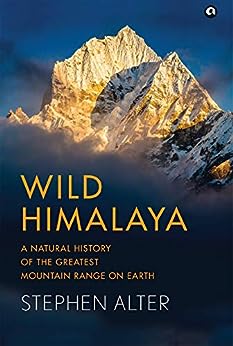 ‘Stephen Alter makes a persuasive case for conserving the wild of the Himalayas, questioning laws framed with no regard for ecology.’-The Hindu

‘Stephen Alter’s exhaustive biography of the Himalayas is an exceptional tribute to the world’s mightiest mountains… I would (if I could!) make this book mandatory reading for anyone planning to visit the Himalaya.’Ranjit Lal, The Indian Express

‘Stephen Alter writes an uplifting story on the mountain lore and natural history of the Himalayas.’- Open

‘From petroglyphs to myths, people to climate change—a fitting history of the Himalayas.’ – Outlook

‘Stephen Alter’s book reflects not just his encyclopaedic familiarity with the world’s highest mountain range but also passion and empathy for its conservation.’-Business Standard

‘The writer’s personal experience with the mountains and its wildlife, including a tiger and brown bears, makes it an intimate read. ’- Tribune India

‘… author Stephen Alter’s writing is as expansive as his personality.’-The Hindu Business Line

‘He (Stephen Alter) has brought to the reader the legendary mountain range complete with its history, geology, science, flora and fauna, folklore and more.’- Free Press Journal

Stephen Alter is the author of twenty books of fiction and non-fiction. He was born in Mussoorie, Uttarakhandand much of his writing focuses on the Himalayan region, where he continues to live and work. His honours include a Guggenheim Fellowship and a Fulbright award. His recent memoir, Becoming a Mountain: Himalayan Journeys in Search of the Sacred and the Sublime, received the Kekoo Naoroji Award for Himalayan Literature in 2015. His most recent work of fiction, In The Jungles of the Night: A Novel About Jim Corbett, was shortlisted for the DSC South Asian Literature Award in 2017. He was writer-in-residence at MIT for ten years, before which he directed the writing programme at the American University in Cairo. He is founding director of the Mussoorie Mountain Festival. --This text refers to the hardcover edition.

4.6 out of 5 stars
4.6 out of 5
238 global ratings
How are ratings calculated?
To calculate the overall star rating and percentage breakdown by star, we don’t use a simple average. Instead, our system considers things like how recent a review is and if the reviewer bought the item on Amazon. It also analyses reviews to verify trustworthiness.
Top reviews

Dippy
5.0 out of 5 stars Gorgeous photos, exquisite illustrations and a gripping narrative
Reviewed in India on 22 January 2020
Verified Purchase
A book that is a delight to hold and behold – this is true labour of love. It is based both on the extensive personal treks of the author, as well as intense research on this massive mountain range. The narrative varies from the lyrical to the philosophical, neither overly scholarly, nor flippant or disparaging. The reader encounters the geology, geography, history, butterflies, animals, birds, religious rites (both sanguineous as well as botanical) and folklore of this natural wonder. Explorers, naturalists and scholars who have devoted their lives to the study of Himalaya are mentioned in detail. The photographs are stunning, capturing enchanting landscapes, exquisite flora and bewitching fauna.
The book ranges from the dammed Ramganga in the foothills to the pristine and spiritual Mansarovar, from the verdant forests of Arunachal Pradesh to the stark icy deserts of Tibet. The disconnected chapters are welcome – one chapter may describe a Mahabharat performance in the heart of the Garhwal hills and the next jumps to the sylvan valleys of the Kanchenjunga, the next ascending to the highest meadow in the world in POK.
Incidentally, from the Lepidopterist family of Smetaceks in Bhimtal, one of the brothers was my classmate in school in Nainital way back in the seventies. Like the author, I too am endemic to the hills, being born of a Kumaoni mother and spending my childhood in the Kumaon and Garhwal hills.
The author is disconsolate with the rapid degradation of the Himalaya and its environs:
"After seven days of the pristine forests of the Eastern Himalaya, we suddenly find ourselves in a smouldering wasteland of accumulated filth with mountains of refuse ignited by spontaneous combustion.
Perched on these huge piles of burning rubbish are hundreds of storks, stooped like solemn hunchbacks with bald heads and heavy beaks. Hanging under their throats is a loose pouch of skin that looks like a deflated balloon…. These flesh-eating birds feed on scraps of carrion brought here from butcher shops and road kills all over the city (Guwahati).
Children run about barefoot through streams of sewage and glaciers of broken glass, while grim birds look like creatures out of an apocalyptic image. Reminded of the giant man-eating birds of Sherdukpen folklore, I can’t help feeling that this is how our world may end, a grotesque vision of a polluted land, populated by carnivorous storks, who squawk and squabble over rotting skin, entrails and bones."
Later:
"Mountains and rivers are revered and worshipped as maternal deities yet the same streams of holy water are defiled with untreated sewage from ‘Vedic Resorts’… Poorly constructed, multi-story hotels with sanctimonious names encroach the riverside in defiance of regulations governing ‘eco-sensitive zones’. Himalayan vistas that once inspired the faithful to give up material pursuits are now hidden behind garish hoardings announcing the chauvinistic discourses of self-aggrandizing holy men, while the eternal silence of the Himalaya echoes with digitized hymns set to a Bollywood beat."
His anguish and anger are obvious:
"Piety and pollution seem to go hand in hand while godliness has become inherently grubby. Pilgrims who travel to the mountains, along with those who enable these spiritual journeys, believe that Himalayan destinations will cleanse their sins. In return, the mountains receive nothing but offerings of filth."
Sadly, no credit is given for the impeccable illustrations heading each chapter. Once again, just the gorgeous photos are a marvellous peek at the haunting beauty of the immutable Himalaya.
Finally, I'd like to add to the third man phenomenon experienced by mountain climbers. This is a hallucination due to a condition called Isolated High-Altitude Psychosis, distinct from High altitude cerebral oedema, and brought on by the complete deprivation of social contact and loneliness for prolonged periods.
Read more
24 people found this helpful
Helpful
Report abuse

Nita Mukherjee
5.0 out of 5 stars Excellent.....difficult to put down!
Reviewed in India on 18 December 2019
Verified Purchase
Another amazing book by one of the greatest contemporary writers......his love of the mountains, in depth knowledge and fluid style of writing are apparent in all his writings, but perhaps never more so than in this one.
Read more
5 people found this helpful
Helpful
Report abuse

HS
5.0 out of 5 stars FANTASTIC
Reviewed in India on 14 January 2021
Verified Purchase
LIKED YHE PICTURES VERY MUCH.AT THIS AGE I AM A SLOE READER. CAN GIVE A BETTER REVIEW LATER.THIS OFCOURSE WILL BE A TREASURE ADDED TO MY COLLECTION OF BOOKS AND TRAVELOGUES ON THE HIMALAYAS.
Read more
3 people found this helpful
Helpful
Report abuse

Patanjali sondhi
5.0 out of 5 stars Informative account covering so many aspects of the mountains
Reviewed in India on 18 September 2021
Verified Purchase
The books takes you from the extreme west of the range to Bhutan and Arunachal. I liked the style of writing imparting knowledge without being ponderous. Excellent read for everyone who wantnge.s to know more about the flora, fauna, people and customs and the geology of this wonderful ra
Read more
Helpful
Report abuse

Sriram
5.0 out of 5 stars Must read
Reviewed in India on 27 October 2020
Verified Purchase
Everything about himalaya's. Fantastic
But paper quality was not good.
Read more
2 people found this helpful
Helpful
Report abuse

Soumya Chandan Panda
5.0 out of 5 stars Life Changer and Influencer
Reviewed in India on 4 July 2021
Verified Purchase
If you are a nature lover this is a must read before you die. I have read the book 3 times since I bought it. It is amazing.
Read more
One person found this helpful
Helpful
Report abuse

sscha
5.0 out of 5 stars Wonderful Book
Reviewed in India on 24 September 2019
Verified Purchase
A wonderful poetic book, a must read for anyone who loves the Himalayas!
Read more
2 people found this helpful
Helpful
Report abuse
See all reviews

Anna C.
5.0 out of 5 stars well researched
Reviewed in the United Kingdom on 24 March 2021
Verified Purchase
An unbelievable amount of work has gone into this book - recommended for anyone who loves this area.
Read more
Report abuse

Craig Davidson
5.0 out of 5 stars Refreshingly informative
Reviewed in the United States on 26 December 2019
Verified Purchase
Wonderfully written overview of the natural history of a remarkable part of the planet.
Read more
Report abuse
See all reviews