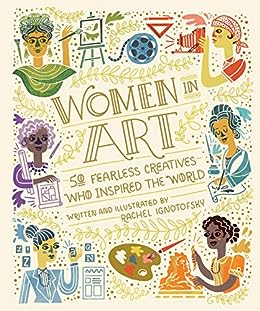 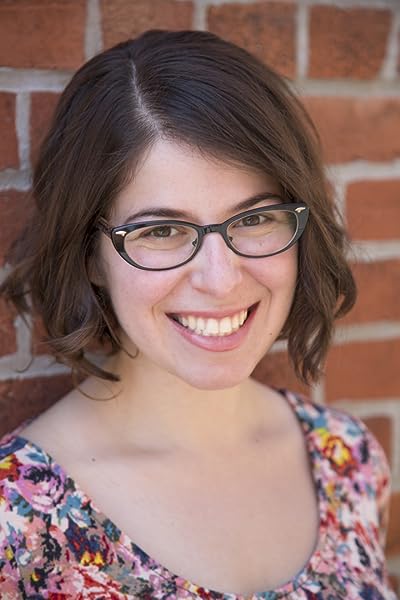 by Rachel Ignotofsky (Author) Format: Kindle Edition
See all formats and editions
Sorry, there was a problem loading this page. Try again.
Illustrated profiles of 50 pioneering female artists--from the 11th century to today--from the author of the New York Times bestseller Women in Science.

A charmingly illustrated and inspiring book, Women in Art highlights the achievements and stories of 50 notable women in the arts--from well-known figures like painters Frida Kahlo and Georgia O'Keefe, to lesser-known names like 19th-century African American quilter Harriet Powers and Hopi-Tewa ceramic artist Nampeyo. Covering a wide array of artistic mediums, this fascinating collection also contains infographics about artistic movements throughout history, statistics about women's representation in museums, and notable works by women. Women in Art celebrates the success of the bold female creators who inspired the world and paved the way for the next generation of artists.
Read more
Previous page
Next page
Kindle e-Readers
Kindle Fire Tablets
Free Kindle Reading Apps
Available on these devices

RACHEL IGNOTOFSKY is a New York Times bestselling author, illustrator, and designer. She graduated from Tyler School of Art's graphic design program and formerly worked as a senior designer and illustrator at Hallmark Greetings. Rachel and her work have been featured in many print and online media outlets such as the New York Times, the Los Angeles Times, Scientific American, Science Friday, Brain Pickings, and more. She is the author of Women in Science, Women in Sports, I Love Science, and The Wondrous Workings of Planet Earth. --This text refers to the hardcover edition.

Art is more than just pretty—it’s powerful! Everything around us, whether you realize it or not, has been touched by an artist. The building you live in, that billboard on the street, the pattern on your shirt—all started as concepts in an artist’s mind. Many think that our ability to express ourselves creatively is what makes humans special. Both men and women have been creating art since the cave paintings of prehistoric times. Yet throughout history, women have been excluded from the story of humanity’s creative expression. The women in this book had to fight sexism, classism, and racism to have their art be seen, taken seriously, and appreciated. Through their struggle to be seen, their art has made history.

Art informs our culture and either confirms or challenges our expectations of what we consider normal. Throughout history, powerful institutions all over the world have employed artists to make sure their story was told properly. Whether it was royalty spending a fortune during the Renaissance to make sure paintings depicted them perfectly, or major corporations today spending millions of dollars on advertisements to sell their products, art is a tool wielded to get a clear message across to the masses.

What happens when people take the power of art back? Many women in this book have used their talent to tell truths, to talk about injustice, and to bring visibility to the unseen, because that is when new ideas can spread and the world can begin to change for the better.

Art can be used to empower and celebrate heroes. During the height of segregation in America, many artists, including Elizabeth Catlett, were denied entry into universities due to racist policies. But Elizabeth was determined to make art that celebrated black people, and she portrayed them with beauty and strength. Today, her art depicting black leaders such as Martin Luther King Jr. and Harriet Tubman has been shown in museums around the world.

Art exposes truths and tells our shared history. When the Allied invasion of Europe came in 1944, artist Lee Miller was the only female photographer on the front line. She was one of the first photographers to document the horrors of the Holocaust. When many denied that the concentration camps were real, Lee’s photographs forced the world to confront the truth.

Art creates icons and rallying cries. Although Frida Kahlo was not fully appreciated during her lifetime, the legacy of her work is a force of its own. She was rediscovered in the 1970s, decades after her death, and her work has since been shown in major museums all over the world. Through dozens of self-portraits, people saw Frida and her joy, pain, hopes, and fears. They also saw a woman who unapologetically did not conform to Western beauty standards and who proudly celebrated her Mexican heritage. Her paintings have influenced modern fashion, music, and film. Frida has become a rallying cry for feminism.

And, perhaps most important, art can heal. When Maya Lin designed the Vietnam Veterans Memorial as a twenty-one-year-old art student, she made a choice to create a new kind of monument. Rather than a traditional flag-emblazoned memorial, Maya designed a simple sloping wall, etched with the names of the fallen. The memorial opened at a time when the country was torn by defeat and divisive politics, but thousands came to mourn, and the wall allowed each visitor to grieve on his or her own terms. Art can be used to create a space that can connect us in our shared humanity.

With each brushstroke, chisel of stone, and line drawn, these women persevered. Today, we celebrate their art and their stories so we can understand how their work has influenced our lives. Art is more than just something beautiful—it shapes and reflects our world. --This text refers to the hardcover edition.

4.8 out of 5 stars
4.8 out of 5
1,352 global ratings
How are ratings calculated?
To calculate the overall star rating and percentage breakdown by star, we don’t use a simple average. Instead, our system considers things like how recent a review is and if the reviewer bought the item on Amazon. It also analyses reviews to verify trustworthiness.

murtuza gandhi
5.0 out of 5 stars Great book and quality
Reviewed in India on 14 August 2020
Verified Purchase
Really great book my two daughters loved it and finished the book in one day. Quality is really nice and the illustrations are very colourful and lots of doodles all around very nice product. I love how it talks about feminism and that no woman is less then a man.
Read more

5.0 out of 5 stars Great book and quality
By murtuza gandhi on 14 August 2020
Really great book my two daughters loved it and finished the book in one day. Quality is really nice and the illustrations are very colourful and lots of doodles all around very nice product. I love how it talks about feminism and that no woman is less then a man.
Images in this review

Dulciemac
5.0 out of 5 stars Everyone should read this
Reviewed in the United Kingdom on 5 July 2020
Verified Purchase
Such an interesting book. I bought it to read to my daughter before bed as I recently noticed how few women artists anyone knows about or learn about at school.
Read more
One person found this helpful
Report abuse

e
5.0 out of 5 stars Great book.
Reviewed in the United Kingdom on 6 May 2020
Verified Purchase
Purchased for my daughter, who loves it. Nicely presented - colourful and designed well. A recommended purchase.
Read more
Report abuse

fran
5.0 out of 5 stars great book
Reviewed in the United Kingdom on 1 February 2021
Verified Purchase
book is great , my god-daughter loves it and the other ones in this series
Read more
Report abuse

Rachel Ignotofsky is a New York Times Best Selling author and illustrator, based in California. She grew up in New Jersey on a healthy diet of cartoons and pudding. She graduated from Tyler School of Art in 2011.

Rachel works for herself and spends all day and night drawing, writing and learning as much as she can. Rachel is a published author with 10 Speed Press and is always thinking up new ideas. Check out her books The Wondrous Workings of Planet Earth, Women In Science, Women in Art, and Women In Sports.

Her work is inspired by history and science. She believes that illustration is a powerful tool that can make learning exciting. She has a passion for taking dense information and making it fun and accessible. Rachel hopes to use her work to spread her message about scientific literacy and feminism.