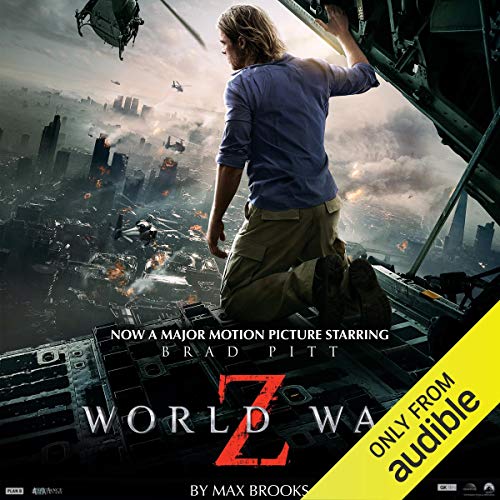 By completing your purchase you agree to Audible’s Conditions Of Use Amazon's Privacy Notice.
Sold and delivered by Audible, an Amazon company
Share
One person found this helpful
Helpful
Report abuse

Prashant
4.0 out of 5 stars Amazing
Reviewed in India on 14 May 2017
Verified Purchase
This book may seem childish but it's far from it. It's well thought, well written and a very different expository experience. The theme is beautiful handled and the realism is captured beautifully. It's a tale of human emotions and the will to not just survive, but dominate. It's a must read ofthis decade. Don't judge this by the Brad Pitt monstrosity.
And the Amazon delivery was very prompt too. A buy worth its weight.

Dilli Trading House
5.0 out of 5 stars Not a good read if you are a zombie, otherwise 5+
Reviewed in India on 24 June 2015
Verified Purchase
I believe it is the most detailed book ever written in this particular niche. The war is detailed as best as it could have been and the interviews present a multi-faceted look at the war and account of varied approaches used by various countries.

A definite must-read for anyone who loves the Zombie niche.
Read more
4 people found this helpful
Helpful
Report abuse

balphanso
5.0 out of 5 stars Very very different way of telling a story
Reviewed in India on 2 December 2015
Verified Purchase
This book was written in a very unique, at least from the books I have read. So many characters with their version of what happened, and leaving you the reader to piece thins together. Very innovative.. Glad I bought it.
Read more
One person found this helpful
Helpful
Report abuse

Koushik Muddu
4.0 out of 5 stars Totally worth the money.
Reviewed in India on 14 June 2017
Verified Purchase
The story captivates you from the first page itself and the narrative is lot different and a lot better than the movie. The quality of book is very good. Feels very light even though it's nearly 350 pages wide. The font can be a bit bigger but you get so engrossed in the story that it doesn't even matter. I would say totally go for it.
Read more

4.0 out of 5 stars Totally worth the money.
By Koushik Muddu on 14 June 2017
The story captivates you from the first page itself and the narrative is lot different and a lot better than the movie. The quality of book is very good. Feels very light even though it's nearly 350 pages wide. The font can be a bit bigger but you get so engrossed in the story that it doesn't even matter. I would say totally go for it.
Images in this review

Rohan Bampal
5.0 out of 5 stars Great work right here.
Reviewed in India on 22 August 2016
Verified Purchase
The book was great! Like the way the zombie apocalypse was told and it's aftermath. Delivery was amazingly fast. Cheers!
Read more
One person found this helpful
Helpful
Report abuse

Venkataseshan
4.0 out of 5 stars Enjoy reading this one
Reviewed in India on 6 October 2015
Verified Purchase
It's really a great book, but you must be at least 16 to understand adult fiction apocalyptic novels. I recommend this book . all zombie lovers must read
Read more
One person found this helpful
Helpful
Report abuse
See all reviews

Edward
5.0 out of 5 stars Brilliant
Reviewed in the United Kingdom on 4 August 2019
Verified Purchase
Not simply about zombies, this is a comment on our society’s lack of preparedness for a global disaster and our arrogance in assuming we can prevail with ease thanks to our technology.

Our best survival tools are the aspects of ourselves we turn our noses up at as being archaic and uncomfortable.

Dorset Reader
5.0 out of 5 stars Everyone should read this book!
Reviewed in the United Kingdom on 16 July 2020
Verified Purchase
My daughter told me to read this and l was reluctant but thought I'd give it a go. So glad I did. I've lost count of how many times I've reread it since.

It's compelling reading - so many voices, backgrounds, nationalities all retelling their experiences during the 10 year war. Zombies are bit players in the drama and conflicts and bravery.

Some of the stories will stay with you long after you've finished reading.

Max Brooks is a skillful, intelligent writer with a strong grasp on how people tick.

Chris Worth
5.0 out of 5 stars Really, really different. Brilliantly so.
Reviewed in the United Kingdom on 30 July 2014
Verified Purchase
It takes a while to get into, but when you get there you'll spend the rest of the book breathless and stunned. It's a totally new kind of novel - no key characters, no plot as such, no narrative three-act structure. The entire book is a series of fictitious "eyewitness accounts" from people affected in some way by the zombie apocalypse. And somehow, as you read each account - in its author's voice and with their hopes and dreams - you enter the storyworld, as engrossing as any thriller.

It works because so many of the tales ring true. When I mentioned to a friend her cooking skills would in great demand after the zombie war, she exploded with protests about her professional background and job. Right at that point in the text, an organiser was talking about how difficult it was to convince a man who used to "get hold of the rights to classic rock songs for commercials" that his skills weren't just inappropriate, they were obsolete - the post-apocalypse world needs carpenters and builders and manual trades, not marketers...

The way the eyewitness interviews develop over time, spanning countries and viewpoints, come together as a single, coherent picture of just what happened, how we solved it, how difficult it was. This book is truly something different. And that's not common in today's lit. A fantastic read.
Read more
31 people found this helpful
Report abuse

Nick Roberts
5.0 out of 5 stars My third reread?My fifth?
Reviewed in the United Kingdom on 26 June 2020
Verified Purchase
5tars always.
WW Z is a fun, easy read and for me the standard against which to judge zombie novels ( and somewhat, zombie films though the epic Brad Pitt film is largely unrelated, having fast British-style 28 Days Later Zs).
The journalist interviewing survivors from all over the world narrative works well: each telling a different part or stage of the apocalypse from official denial and cover-up, outright lying by many countries' rulers (with noble exceptions) ,through to disastrous or non-existent countermeasures, defeat, slaughter, panicked flight, exile and eventual stalemate, and thereafter on to counter attack and human resurgence. Lots of different characters, situations and ideas to enjoy. And if the American Brooks gets his ideas of the British from a Hollywood view of us, well who can blame him?
It's a relaxing book to reread on holiday and with maybe one eye on the weather.
And as we start to come out of internal exile as Corvid19 sputters to some kind of constant low rolling tragedy I'm not sure the pre WW Z leaders come out as quite the dolts and crooks (and clearly Noughties Republicans in the States) that progressive Brooks made them out to be: imagined them way back when. At least they tried NOT to crash the world economy in a panic over their pandemic.
And yes, Brooks'' postwar world is mostly liberal,.globalist, and basically written as if Bill Clinton and Colin Powell had saved the world,.with a little help from moderate communists and Silicon Valley Democrats. Also, it's very much a pre-internet world and so it's Spielberg? or Tarantino? who keep civilian morale up rather than Amazon Prime and Netflix might try to do today.. Might.
Brookes tries to be fair to people (even Americans) not like himself., so it's
not much of a torment to read his preachy Greens or New Dealers gloating about their triumphs- patriots and professional soldiers and monarchists get a fair whack. Great fun for all the English-speaking folk apart from the then-extreme bookends of Left and Right.
But it's now the summer of 2020 and with western cities in flame, the police on their knees and the statues of soldiers who defeated the Confederacy and Hitler vandalised,destroyed or locked away for safety, who knows? -perhaps Brooks' exciting fantasy of postwar poverty, unnecessary food rationing, Tsarism peace and Social Democracy may soon seem like a dream of paradise.
Five stars for a fiver well spent way back when . Treat yourself to what may very well be numerous re-reads. And it's got to be nicer than living in Seattle right now..
Read more
2 people found this helpful
Report abuse

lola1805
5.0 out of 5 stars My all time favourite book
Reviewed in the United Kingdom on 30 November 2020
Verified Purchase
I love this book. I am not, in general, a reader of horror/zombie genre, but whenever anyone asks for a book reccomendation this is the one I give. The anthology style and focus on the nature of human society, means that you could lift zombies out of the book and replace it with any form of pandemic and how it would affect us as people and it would be just as effective. I have read this book 5 times and was the book I took into hospital with me when I went to give birth as I knew it would captivate and distract me. This is the second copy I have bought as I leant it to a friend and his dog ate it...
Read more
One person found this helpful
Report abuse
See all reviews
Back to top
Get to Know Us
Connect with Us
Make Money with Us
Let Us Help You
EnglishChoose a language for shopping.
© 1996-2021, Amazon.com, Inc. or its affiliates