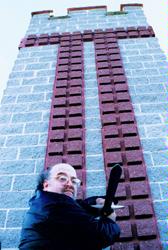 Peter David reinvents X-Factor — again! Jamie Madrox has become a private eye. But with so many of his duplicates out in the world, is an identity crisis imminent? X-Factor Investigations recruits Guido, Wolfsbane, Siryn, M and Rictor — plus Layla Miller, who knows stuff! But can the team help mutantkind navigate M-Day and deal with their unbalanced former ally Quicksilver? X-Factor butts heads with Singularity Investigations, X-Cell, the Isolationist and more. But what happens when two of Madrox’s dupes want their own lives — and when Jamie and Layla are thrown into the future? With Mutant Town under siege, Skrulls running rampant, personal problems tearing the team apart and a major change for Siryn, can X-Factor survive?

Peter David is the New York Times bestselling author of numerous Star Trek novels, including the incredibly popular New Frontier series. In addition, he has also written dozens of other books, including his acclaimed original novel, Sir Apropos of Nothing, and its sequel, The Woad to Wuin. David is also well known for his comic book work, particularly his award-winning run on The Incredible Hulk. He recently authored the novelizations of both the Spider-Man and Hulk motion pictures.He lives in New York.