<![endif]--> Skip to main content
The Zahir: A Novel of Obsession and over 2 million other books are available for Amazon Kindle . Learn more
Share <Embed>
Have one to sell?
Sell on Amazon 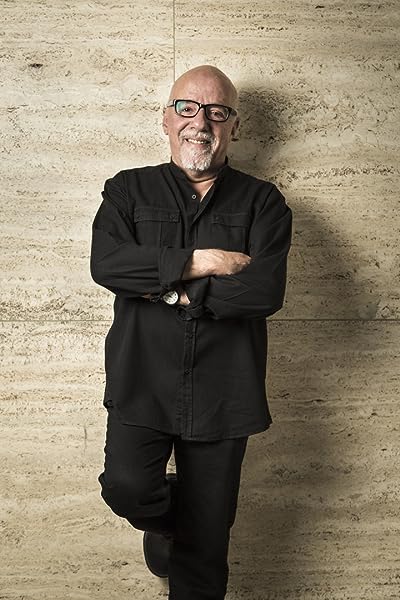 Paulo Coelho, born in Rio de Janeiro in 1947, is one of the bestselling and most influential authors in the world. The Alchemist, The Pilgrimage, The Valkyries, Brida, Veronika Decides to Die, Eleven Minutes, The Zahir, The Witch of Portobello, The Winner Stands Alone, Aleph, Manuscript Found in Accra, and Adultery, among others, have sold over 175 million copies worldwide, and The Alchemist has been on the New York Times bestseller list for over 360 weeks.

Paulo Coelho has been a member of the Brazilian Academy of Letters since 2002, and in 2007, he was appointed United Nations Messenger of Peace. He is also the most followed author on social media.

Even before listening, an especially beautiful package in peaceful and harmonious shades of soft coral and delicate sand casts a spell on the listener. Then, Jamie Glover's elegantly restrained and deeply felt narration achieves an understated and unforgettable listening experience. The plot is an intriguing puzzle: A man searches for a beloved wife who has mysteriously vanished with a mutual friend. The protagonist subsequently embarks on a journey to find her and, most importantly, to understand what made her leave him without notice and without apparent reason. Moving and meaningful as a story, this work, for some listeners, may also result in a significant search for their own selves, as well. L.C. 2006 Audie Award Finalist © AudioFile 2006, Portland, Maine-- Copyright © AudioFile, Portland, Maine

Start reading The Zahir: A Novel of Obsession on your Kindle in under a minute.

4.4 out of 5 stars
4.4 out of 5
527 global ratings
How are ratings calculated?
To calculate the overall star rating and percentage breakdown by star, we don’t use a simple average. Instead, our system considers things like how recent a review is and if the reviewer bought the item on Amazon. It also analyses reviews to verify trustworthiness.

TwinkleA
5.0 out of 5 stars probably my favourite book of Paulo Coelho from now on!
Reviewed in India on 21 July 2016
Verified Purchase
Loved it! The story is amazing and is also very relatable. Its about a famous writer and how his wife suddenly disappears and then he has to find her. And in order to find her he has to find himself first. :) a must read for anyone who's Coelho fan as well as looking for motivation!
Read more
13 people found this helpful
Helpful
Comment Report abuse

Abir Majumder
5.0 out of 5 stars Delivery Review
Reviewed in India on 2 October 2020
Verified Purchase
My 3rd purchase of Paul's writings after Alchemist and Fifth Mountain, eagerly waiting to read it.
Book condition is very good and the package has been handled carefully. In toto everything is very satisfying.
A request to Amazon to make it mandatory to provide book Barker with every purchase. It may only cost 1rs extra but will be very exciting for the customers.

Karthika
5.0 out of 5 stars Loved it
Reviewed in India on 22 November 2020
Verified Purchase
I loved this book. I know it is not for everyone. I have seen many negative reviews. And I understand this books talks more about spirituality than the actual story, and in between it gets a little boring, but for me many pages made me cry, made me think, inspired me as well. It was a beautiful experience, reading this one, it made me question a lot my beliefs and my values. I am glad I read this book.
Read more

Kulsum
5.0 out of 5 stars Paulo Coelho never fails to convey the message
Reviewed in India on 17 November 2020
Verified Purchase
The book surely starts slow, but again, its paulo coelho and its worth getting glued to it till the end.

This book is not about what happens in the end. Instead, its about what it conveys by the end.

Definitely recommended for people who are unsure of their lives and what they re upto, their emptiness, their insecurities, their confusions...

Manish Manu
4.0 out of 5 stars Even delivered on time and novel is also good
Reviewed in India on 18 January 2018
Verified Purchase
Must go for this book if you have patience to know the story. I use to read Paulo Coelho's novels after engaging to one of his materpiece i.e., "The Alchemist"
The book is readable.
Read more
5 people found this helpful
Helpful
Comment Report abuse

Syed Matiur Rahman
5.0 out of 5 stars A fabulous read...
Reviewed in India on 26 August 2017
Verified Purchase
The Book takes us through various cultures..France, Kazakhstan..guides us through the titbits of balances between modern life & life we can imagine...The cultures of Kazakhstan is truly awesome...
PC is best at philosophy, and everyone knows , philosophy is the essence of life....
Read more
3 people found this helpful
Helpful
Comment Report abuse

bambeefly
5.0 out of 5 stars I love it
Reviewed in the United Kingdom on 30 September 2016
Verified Purchase
My favorite Coelho's book. A woman leaves her husband with no explanation and she starts to find out how to be happy. She leaves no note, takes nothing with her, it looks like she's disappeared. Her husband will look for her because he loves her and learn a lot in this journey.

"When someone leaves, it's because someone else is about to arrive - I'll find love again."
Read more
3 people found this helpful
Report abuse

Joost Beckers
4.0 out of 5 stars Spiritual food
Reviewed in the United Kingdom on 4 August 2020
Verified Purchase
A wonderful journey to be part of and a necessary spiritual food you need to fast from time to time. Mentally stimulating and to be enjoyed in silence to maximize your own creative mind.
Read more
Report abuse

Mrs. V. R. Prince
2.0 out of 5 stars Dull tale of self-obsession
Reviewed in the United Kingdom on 6 March 2013
Verified Purchase
We read this with our reading group and we were pretty unanimous that this was rather dull. (Most people couldn't be bothered to finish it, even those who were normally fans of Paulo Coelho). It was entirely peopled by utterly self-obsessed, rather pretentious characters and, although this appeared to have been the point of the book, it just didn't make for riveting reading. It was apparently auto-biographical and, as such, seems to have been an exercise in self-indulgence. Give it a miss.
Read more
2 people found this helpful
Report abuse

Donna
4.0 out of 5 stars Profound and thought provoking
Reviewed in the United Kingdom on 15 June 2015
Verified Purchase
It took a while to get into this book...but once I did, I thoroughly enjoyed it. For anyone wondering what love is, for anyone feeling trapped in a life they should be happy with, and fans of Paulo Coelho's work. One I'll definitely revisit.
Read more
Report abuse

Sonia
5.0 out of 5 stars Loved it :-)
Reviewed in the United Kingdom on 9 November 2017
Verified Purchase
Easy to read and always relatable. It had been a while since I read one of his books, and will now be looking for another.
Read more
Report abuse
See all reviews
Unlimited FREE fast delivery, video streaming & more
Prime members enjoy unlimited free, fast delivery on eligible items, video streaming, ad-free music, exclusive access to deals & more.
> Get started
Back to top
Get to Know Us
Connect with Us
Make Money with Us
Let Us Help You
EnglishChoose a language for shopping.
© 1996-2020, Amazon.com, Inc. or its affiliates