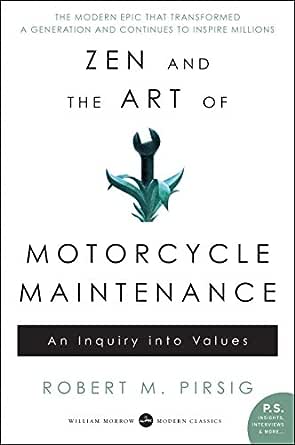 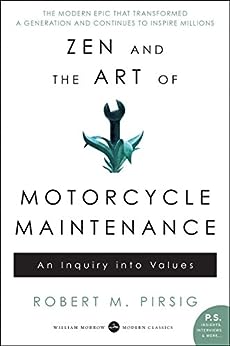 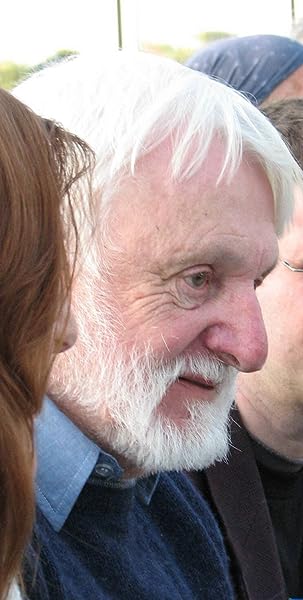 Zen and the Art of Motorcycle Maintenance: An Inquiry Into Values 1st Edition, Kindle Edition

In his now classic Zen and the Art of Motorcycle Maintenance, Robert Pirsig brings us a literary chautauqua, a novel that is meant to both entertain and edify. It scores high on both counts.

Phaedrus, our narrator, takes a present-tense cross-country motorcycle trip with his son during which the maintenance of the motorcycle becomes an illustration of how we can unify the cold, rational realm of technology with the warm, imaginative realm of artistry. As in Zen, the trick is to become one with the activity, to engage in it fully, to see and appreciate all details--be it hiking in the woods, penning an essay, or tightening the chain on a motorcycle.

In his autobiographical first novel, Pirsig wrestles both with the ghost of his past and with the most important philosophical questions of the 20th century--why has technology alienated us from our world? what are the limits of rational analysis? if we can't define the good, how can we live it? Unfortunately, while exploring the defects of our philosophical heritage from Socrates and the Sophists to Hume and Kant, Pirsig inexplicably stops at the middle of the 19th century. With the exception of Poincaré, he ignores the more recent philosophers who have tackled his most urgent questions, thinkers such as Peirce, Nietzsche (to whom Phaedrus bears a passing resemblance), Heidegger, Whitehead, Dewey, Sartre, Wittgenstein, and Kuhn. In the end, the narrator's claims to originality turn out to be overstated, his reasoning questionable, and his understanding of the history of Western thought sketchy. His solution to a synthesis of the rational and creative by elevating Quality to a metaphysical level simply repeats the mistakes of the premodern philosophers. But in contrast to most other philosophers, Pirsig writes a compelling story. And he is a true innovator in his attempt to popularize a reconciliation of Eastern mindfulness and nonrationalism with Western subject/object dualism. The magic of Zen and the Art of Motorcycle Maintenance turns out to lie not in the answers it gives, but in the questions it raises and the way it raises them. Like a cross between The Razor's Edge and Sophie's World, Zen and the Art of Motorcycle Maintenance takes us into "the high country of the mind" and opens our eyes to vistas of possibility. --Brian Bruya

"A miracle . . . sparkles like an electric dream." -- The Village Voice

"It is filled with beauty. . .a finely made whole that seems to emanate from a very special grace." -- Baltimore Sun

"The book is inspired, original. . . . The analogies with Moby-Dick are patent." -- The New Yorker

4.3 out of 5 stars
4.3 out of 5
82 customer ratings
By customer groups & interests
Philosophy
4.0
Motorcycles
4.8
Is this helpful?
Yes
No
Thank you for your feedback.

Prakash Holla
5.0 out of 5 stars An enigmatic narrative of phenomenon of life.
9 November 2017
Verified Purchase
Intertwining the material with the immaterial, life with the philosophy, science with psychology in a narrative which cajoles, grips, frightens, interrogates, explains and ultimately leaves you perturbed and satisfied at the same time! It sharpens your thought at a numbing speed...
Read more
5 people found this helpful
Helpful
Comment Report abuse

Lavi
3.0 out of 5 stars It's a complicated book
1 January 2020
Verified Purchase
Well I must say it's one of those books which is a totally not an easy read. To start with there is this motorcycle trip and lots of self talk. The talks at ti eare so lengthy and there is so much of here and there. There were talks of philosophy, of human behaviour complexities, insanely long conversation on quality. It could have been compressed greatly. Though people have given this book amazing ratings and for that reason I picked it up, due to the unnecessary length of it the message I feel is lost somewhere.
Read more
Helpful
Comment Report abuse

Vipul Sharma
5.0 out of 5 stars Classic.. speechless after reading it
25 October 2018
Verified Purchase
its a special book.. you have to immerse yourself into the words and ink to really understand what the author wants to convey.. not an easy read for casual book lovers, but for those who get what it is saying, its a masterpiece.. once in a generation book..
Read more
4 people found this helpful
Helpful
Comment Report abuse

Elvin Lukose
4.0 out of 5 stars A work of art
22 May 2019
Verified Purchase
Its the author's personal oddsey into how he came about his concept of Metaphysics of Quality distilled with a biographical account of his motorcycle journey across the States. Its a bloody tough read and definiyely requires multiple readings but its worth it for a curious mind. If highest impact any work of art can have on anyone is how it makes you think; how your perpective shifts and changes your worldview then this is that work of art. Its informative, reflective, insightful and towards the end, poignantly emotional.
Read more
Helpful
Comment Report abuse

Vinay Prax
5.0 out of 5 stars No it's not about bikes
30 January 2016
Verified Purchase
but the joy of the journey of life. Sheer pleasure of reading this book that shows the light and the dark side of life with such zest that you might not see what is what
Read more
4 people found this helpful
Helpful
Comment Report abuse

Go to Amazon.com to see all 1,670 reviews 4.2 out of 5 stars
click to open popover
Unlimited FREE fast delivery, video streaming & more
Prime members enjoy unlimited free, fast delivery on eligible items, video streaming, ad-free music, exclusive access to deals & more.
> Get started
Back to top
Get to Know Us
Connect with Us
Make Money with Us
Let Us Help You
EnglishChoose a language for shopping.
© 1996-2020, Amazon.com, Inc. or its affiliates