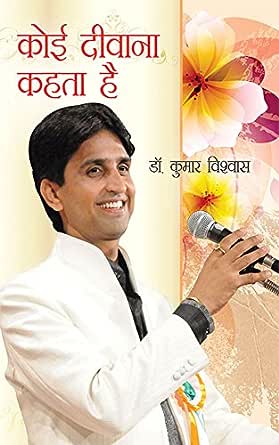 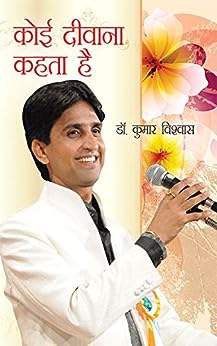 Kumar Vishwas lyrical poems fulfill the poetic criterion of 'Satyam, Shivam, Sundaram' laid down in the cultural philosophy of India as they have an uncomplexed natural flow of feelings, expansion of imagination and very apt vocabulary, assuring his bright future as a poet.
Though younger in age, he is quite mature as a poet whose presence on the podium enhances its grace. His sonorous voice, typical style and high range as a lyrical poet elicit encomium and 'encore' in even measure with his distinct diction transporting the listeners to different world! After Gopal Das Neeraj no other poet has got such a prolific response from the audience as he has achieved at the stage-performances.

Dr. Kumar Vishvas is an Indian Youth Icon, who carries several aspects in his personality. As a celebrated Hindi poet, he is well known across the world. He is credited with reviving Hindi poetry among young generation. The tech-savvy young generation values Dr. Vishvas as their icon. This is evident from the fact that on one side, where his online videos have been watched millions of times by young netizens, on the other hand his official page on a leading Social Networking website Facebook invites approximately 5 Million clicks a month. Besides a poet, he has been recognized as a social communicator, who is known as a straight-forward speaker on social issues and as a motivator who ignites young minds with his communication expertise. A professor by profession, Dr. Vishvas is also involved in writing Scripts, Lyrics and Stories for Indian Film Industry. He is the first performing poet of any language across the world, whose poems in his own voice, have been hosted as Caller-back tunes on all major telecom operators of india. Overall, Dr. Kumar Vishvas is an iconic blend of a Performing Poet, an Author, a Social Communicator and a Motivator. Having penned numerous poems and articles, Dr. Kumar Vishvas is known to be a prominent author of Hindi language. Two of his books have been published by renowned publishing houses of India. While ‘Ik Pagli Ladki Ke Bin’ (1996), as a debut collection from a youngster, became an apple of eye for readers as well as critics, his second poetry collection ‘Koi Deewana Kehta Hai’ (2007) became a best-seller. The book created new records in sales volume in the succeeding years. It was reported as the highest selling book during events like Delhi Book Fair 2010, and World Book Fair 2011. Best recognized as a poet of Shringar Ras (Romantic Genre), Dr. Kumar Vishvas has been regular columnist with several publications. Besides Hindi-Urdu poems, he has been writing articles for reputed Indian Hindi magazines on a regular basis. His expertise as a writer has been utilized during several non-political social campaigns also. His successful endeavor with pen has attracted several Bollywood (Indian Film Industry) projects. At present, Dr. Vishvas is working on about two dozen projects from Bollywood. He has been roped in by several production companies for Penning Lyrics, Story, Script and Dialogues for upcoming movies/ tele-serials. His maiden movie is expected to be on screen very shortly.

4.4 out of 5 stars
4.4 out of 5
544 customer ratings
How does Amazon calculate star ratings?
Amazon calculates a product's star ratings based on a machine learned model instead of a raw data average. The model takes into account factors including the age of a rating, whether the ratings are from verified purchasers and factors that establish reviewer trustworthiness.

deepak
5.0 out of 5 stars Love you kv
Reviewed in India on 2 January 2018
Format: PaperbackVerified Purchase
Very nice poem
Every line touch my heart luv u kv@

Rakshita Nagayach
5.0 out of 5 stars Beautifully written
Reviewed in India on 4 November 2019
Format: PaperbackVerified Purchase
I gifted this book to my mother as she is a major fan of Dr. Kumar Vishwas. The poems are very well-written and she finished it in one day.
Read more
Helpful
Comment Report abuse

yogesh lohumi
2.0 out of 5 stars ☺️
Reviewed in India on 21 October 2019
Format: Kindle EditionVerified Purchase
It is much better to listen poems on youtube rather than then to purchase it. It is not worth to spent money on the book.
This is my personal opinion, that reading poetry in the book does not give the actual feeling of joy,
Read more
Helpful
Comment Report abuse

krushna patle
5.0 out of 5 stars Best hindi poems.
Reviewed in India on 17 April 2018
Format: Kindle EditionVerified Purchase
Must read for the people who loves the hindi kavita. Got the kindle book at very less price. If you are fan must read.
Read more
One person found this helpful
Helpful
Comment Report abuse
See all reviews from India

SFCA
5.0 out of 5 stars Beautifully written
Reviewed in the United States on 30 October 2017
Format: Kindle EditionVerified Purchase
Beautifully written. Vishwas's words have the power to touch your hearts
Read more
One person found this helpful
Helpful
Sending feedback...
Thank you for your feedback.
Sorry, we failed to record your vote. Please try again
Report abuse