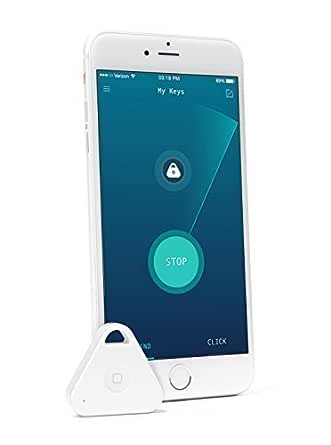 1 / 11 / 1
Previous page
Next page
Is this helpful?
Thank you for your feedback.
Share
Have one to sell? Sell on Amazon

by nonda
2.7 out of 5 stars 299 ratings
10 Days Returnable
Warranty Policy
Warranty Policy
No Warranty
Available from these sellers.
New (4) from ₹ 3,907.00 + FREE Shipping

Specifications for this item

Mr. & Mrs.
5.0 out of 5 stars These work and you can recharge them so they last more than a year.
23 May 2016 - Published on Amazon.com
Verified Purchase
These are pretty good... I've had one on my keychain since shortly after they came out and it's stood up very well for something made of plastic.

Oh, and they work... I set my calendar to charge them every three weeks and that's probably well on the conservative side. For the newcomer to these things: if you have your phone you can find your keys and if you have your keys you can find your phone (within limits, of course). These are a bit bigger than the type that only lasts a year but not all that much bigger.

Barbara French
5.0 out of 5 stars Great product! WARNING - Don't Panic
9 January 2017 - Published on Amazon.com
Verified Purchase
Great product! WARNING - Don't Panic! If your keys get to far away from your phone and you try to find your keys using the iHere it will only show you the last general area where they disconnected from each other. All you have to do is to be in the general area where the map says that your keys are located and restart your Bluetooth on your phone. After a second the FIND button on your iHere app. should reappear so you can push it and have the alarm sound on your keys. So far, my has NEVER failed to work. The "Call Phone" and "Find Car" functions are really great too.
Read more
53 people found this helpful

Amazon Customer
3.0 out of 5 stars Good hardware paired with sloppy software
12 November 2015 - Published on Amazon.com
Verified Purchase
This product has two parts, the actual device and the software for your phone. The problem is while the device itself is solid, the app does not perform well.

The actual iHere device is well made, feels pleasant to use and has a reasonably loud speaker in it so finding it in most circumstances is quite easy. It does not use a standard micro usb charging cable which is a ding against it, and the shape and thickness do make it rather bulky on any keychain and definitely won't fit in a mans wallet well.

The battery life has been quite good, on the first charge it has gone over a week and still at 95% battery. I suspect after a few charge cycles this will decrease but initially it's quite impressive.

The range is acceptable and usually ends up going out of range around 30-50 ft away from your phone.

The device itself gets 5 stars.

The problem is the app - without which the device is useless.

Nonda seems pretty light on testing their updates, at least for older phones (4S) and so several times now I have had an update render my app useless. Their support is quick to answer requests and usually the response is in very clear English. A few times I have gotten a response from someone with poor English but the response is still understandable.

Usually they fix the issue with their app within a week or two, which is a reasonable turnaround time but due to the number of issues I have spent more time with it not working than it has been working. This is a big ding for a device that you rely on for when you need it.

When it is working some of the app functions are very reliable - ringing the iHere works well, the car park feature seems pretty accurate and the camera shutter works but you cannot use it with the iphone camera app, but rather the picture mode build into their iHere app. The voice recorder works similarly.

Less reliable is the function to call the phone from the iHere which only works sometimes. I think this is largely due to the phone closing the app in the background which means it's not looking for or listening for the iHere signal.

Completely unreliable is the "Last known location" of the iHere as it seems to mark the last location that you had the app open and connected to the iHere. This obviously isn't very useful and possibly also due to memory management on the phone.

The software lacks a safe zone for the anti lost feature which is kind of annoying as just walking around your house with the keys in another room can trigger the alarm, sometimes just random connectivity issues trigger the alarm also. This can happen in the middle of the night while sleeping so safe zones would really be a good feature as it's annoying to turn the feature on and off regularly.

The app looks good and runs smoothly for the most part and is fairly intuitive to use.

Overall this is a 5 star device hampered by some lacking software. I don't know if other keyfinder devices have similar issues, so can't compare, but if you get it working, then set your app not to auto update and keep it charged I think it will at least reliably serve it's base function of finding your keys.

Consider the other functions bonuses that work sometimes or most times but are not always reliable.

Tievoli
1.0 out of 5 stars The unit and the idea is great, but not the quality.
19 April 2018 - Published on Amazon.com
Verified Purchase
Pros.
The idea is great, and when it works is great too, unfortunately, it does only on certain occasions.
Cons.
1. The green light never comes up, only red, even when is fully charged.
2. The separation doesn't work.
3. Leave it overnight with the application off, it disconnects. It will connect when I try to charge again, which is ridiculous. What if I need to find the keys or the wallet? It's disconnected.

If the QA would be better maybe this company would not have so many returns.
Read more
5 people found this helpful

Dan
1.0 out of 5 stars Waste of time and money
20 November 2017 - Published on Amazon.com
Verified Purchase
Even charging this product the single light on it blinked a lot. Finally, it was steady green. Then the product wouldn't pair! What is there to say? Waste of time and money. Returning.
Read more
7 people found this helpful
Go to Amazon.com to see all 297 reviews 2.7 out of 5 stars
Unlimited FREE fast delivery, video streaming & more
Prime members enjoy unlimited free, fast delivery on eligible items, video streaming, ad-free music, exclusive access to deals & more.
> Get started
Back to top
Get to Know Us
Connect with Us
Make Money with Us
Let Us Help You
EnglishChoose a language for shopping.
© 1996-2020, Amazon.com, Inc. or its affiliates